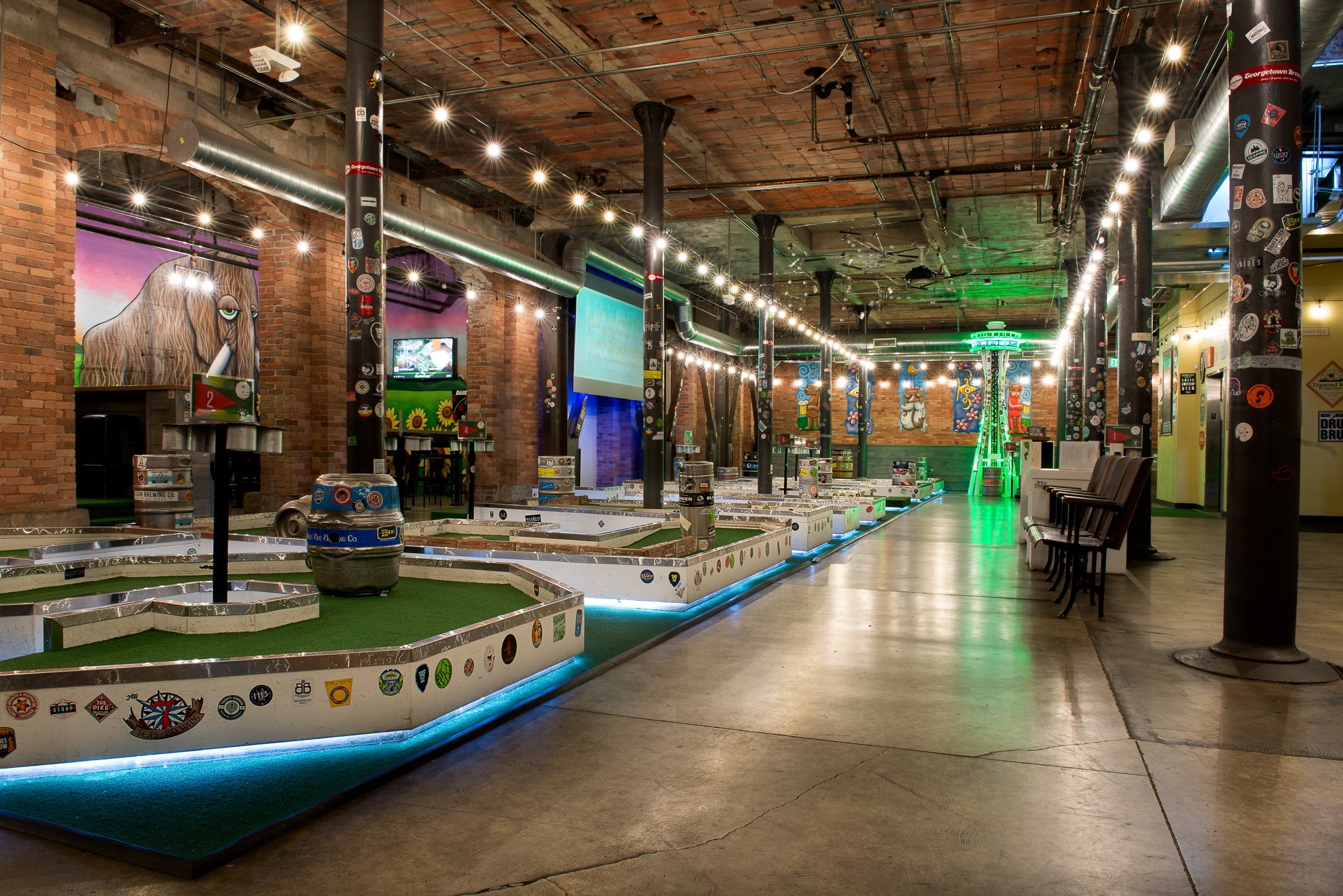 Flatstick Pub resides in the basement of the Pacific Commercial building, a 120-yeard old historic gem now connecting with the Corgiat Building with the Furuya Building through the interior after a 2006 rehabilitation and historic preservation project. Built in 2016 as their second location, the Flatstick Pub has established itself as a vibrant part of the Pioneer Square neighborhood in only a short time.

Located in the historic district, with extensive input from the historic board, Flatstick Pub was designed to merge their original brand with the historic and industrial nature of this unique space. The design team wanted to celebrate the original character of the building and create a space that felt as though it had been there for decades while reflecting the type of environment where you might hang out with your friends in your favorite basement to play games over a beer. Showcasing 30 Washington beers and ciders in a constantly rotating supply, a Seattle native muralist, and food by a local neighborhood chef, Flatstick aims to promote everything local.

In preparing the core and shell for the new concept, the floor had to be leveled with a new concrete slab, and the stair up to the sidewalk needed to be reconstructed. Additionally, there was only a single stair and elevator connecting the two sides of the basement. A new opening in the 25” thick brick wall was required to improve access to connect the bar with the golf and party areas.

At the entrance to the space, after descending the stairs from the street, is the bar and dining area. The bar tops were made from 1/2" steel plates which, paired with wood plank wall coverings and plumbing pipe foot rails, play perfectly into the industrial-rustic character of the original building. By exposing all of the new utilities, the new mechanical, electrical, and plumbing elements are exposed overhead, creating a ceiling busy with new and old metal elements.

At the lower level, the majority of the space is devoted to mini golf, with holes organized to spell out "SEATTLE," and one that is a 12' tall replica of the Space Needle. Around the perimeter of the golf area are semi-private party rooms, which allow guest to gather around the specific game-based themes in small groups. These spaces are built in the “areaway”, which is technically outside the building, beneath the sidewalk. Resulting from a time when the streets of the area were raised, these spaces reveal part of the history of the building and the region.

Taking inspiration from the raw, industrial character of the existing conditions, new materials were chosen to fit the aesthetic. The bartop is 1/2” thick steel plate; rails, dividers, and supports are steel plumbing pipe; wood planks and more steel plate was used as wall coverings, all allowed to patina with use. Even the light fixtures were specifically chosen to blend in with the existing pipes in the ceiling.

From a once forgotten and unusable space, Flatstick Pub in Pioneer Square successfully combines historic rehabilitation with neighborhood enhancement to help create a more vibrant community by bringing a safe, comfortable space for people of all ages to gather and have a good time that feels like your best friends’ basement that could have been around for generations. 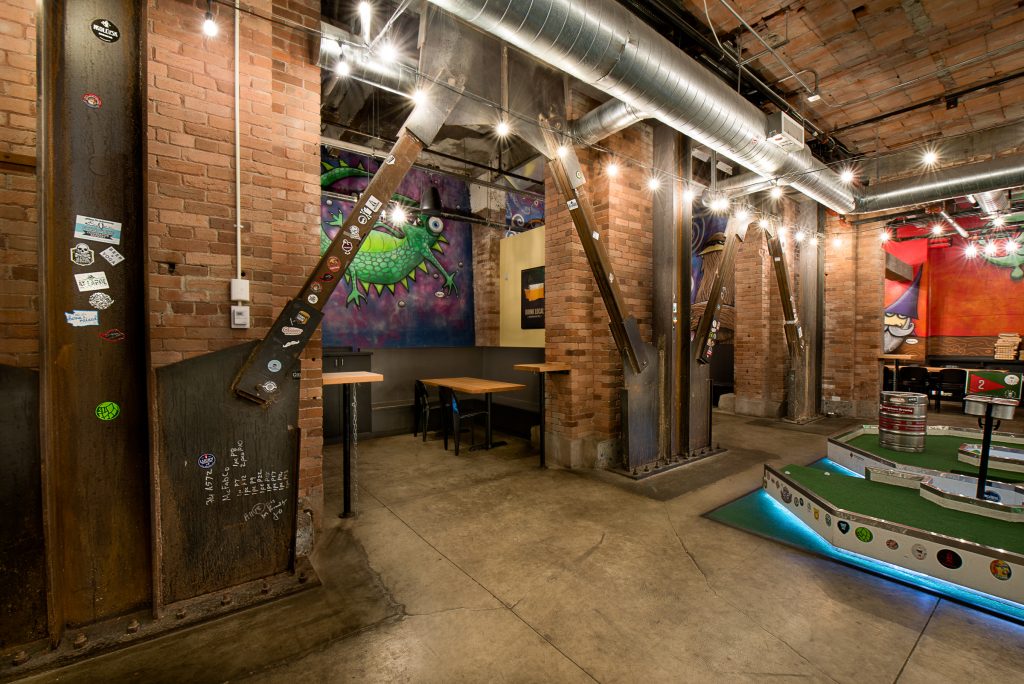 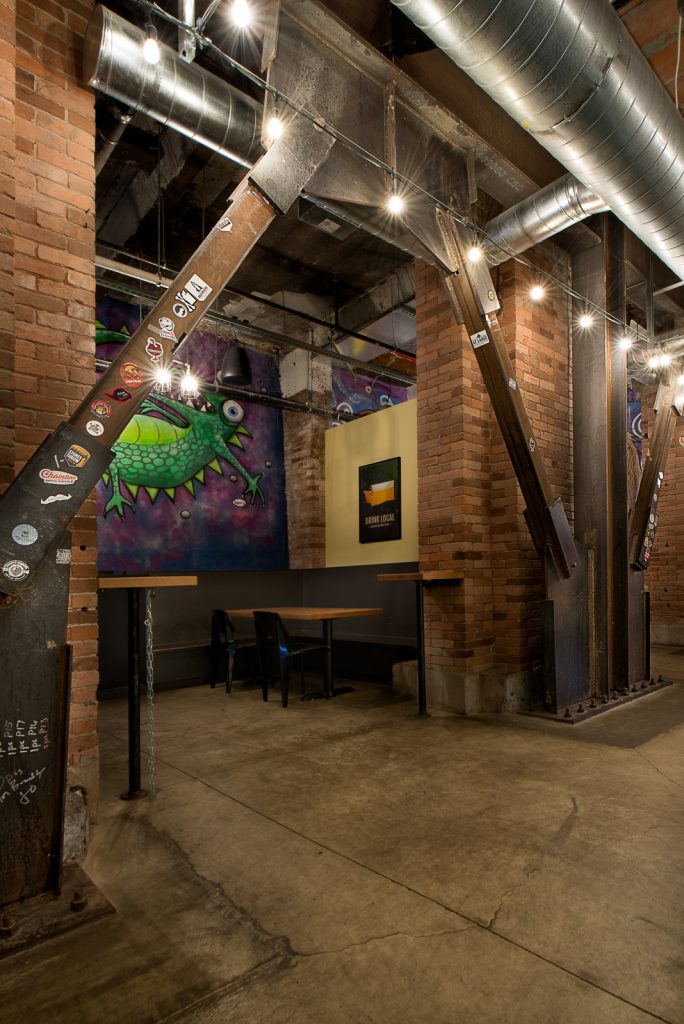 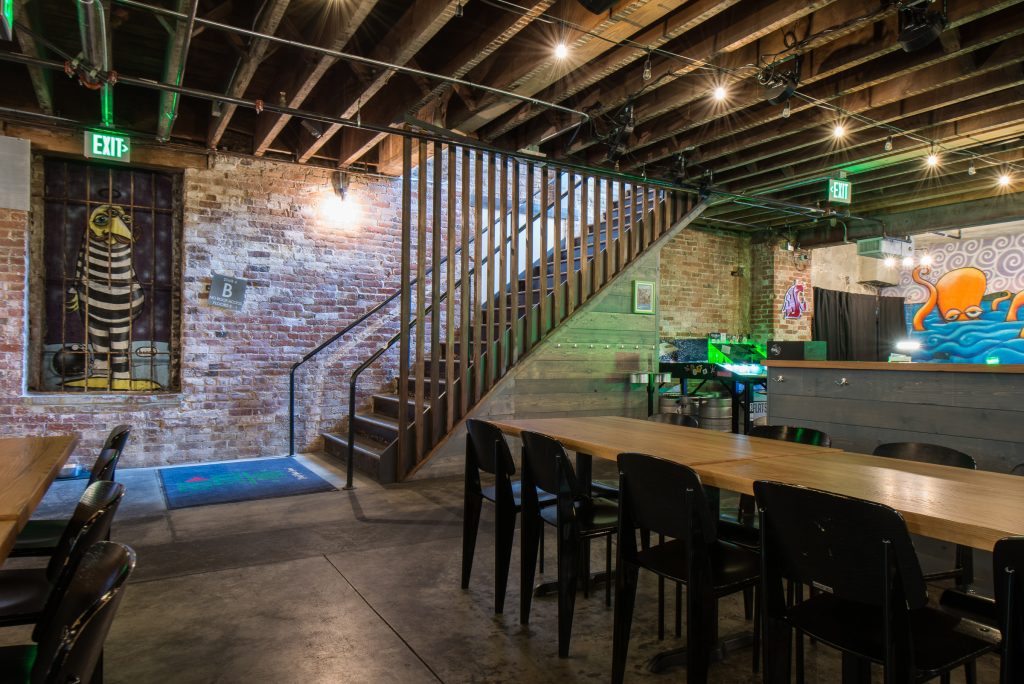 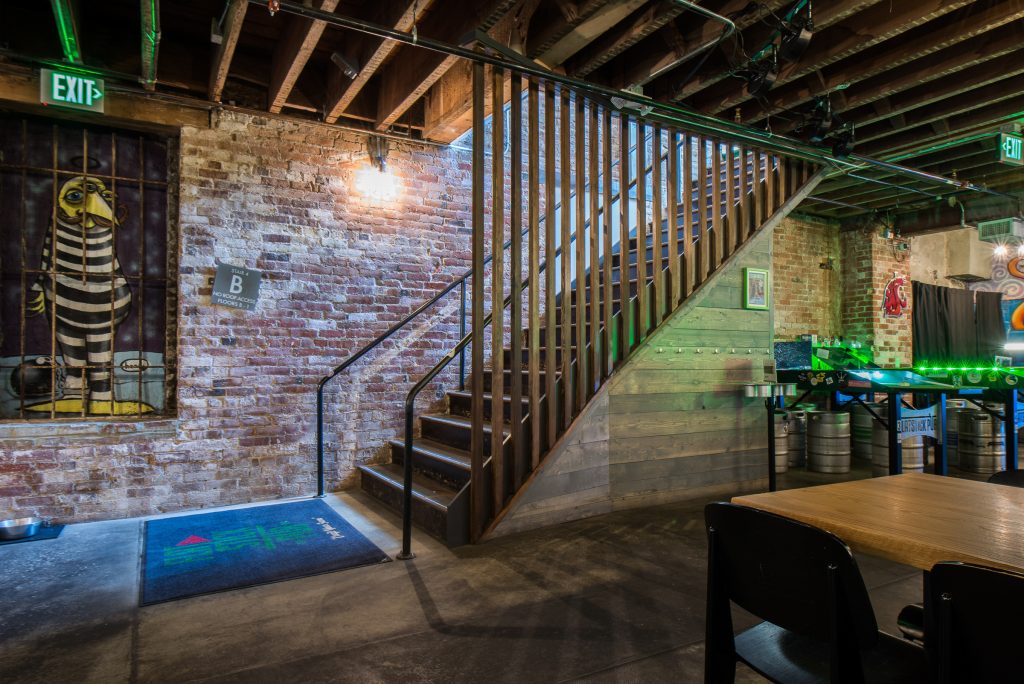 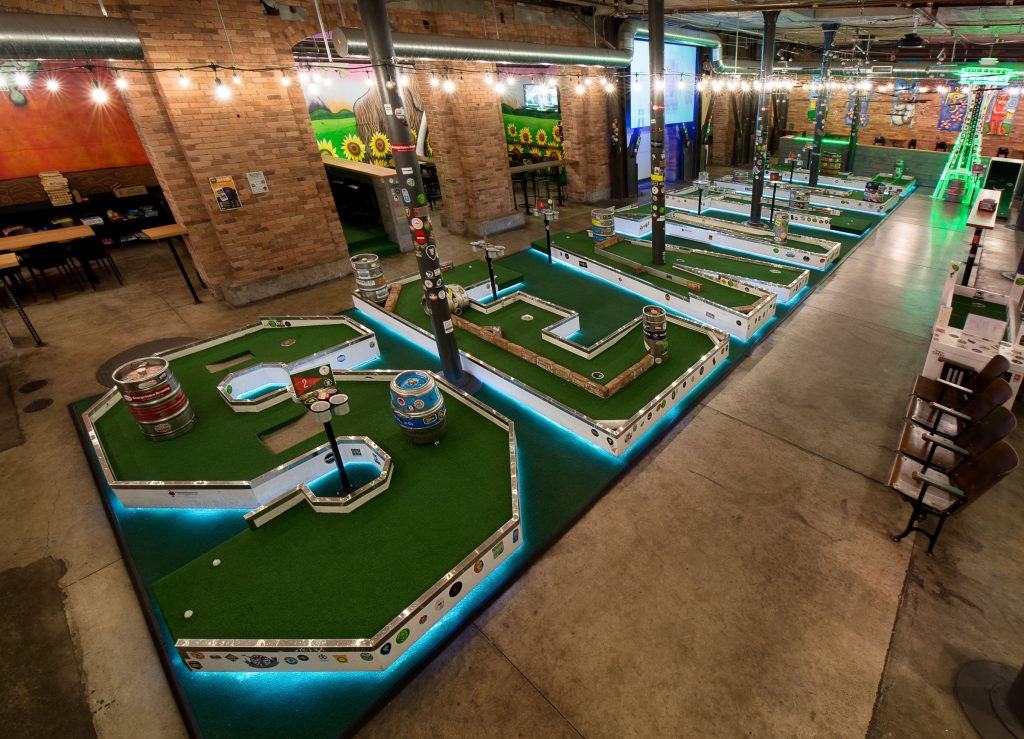 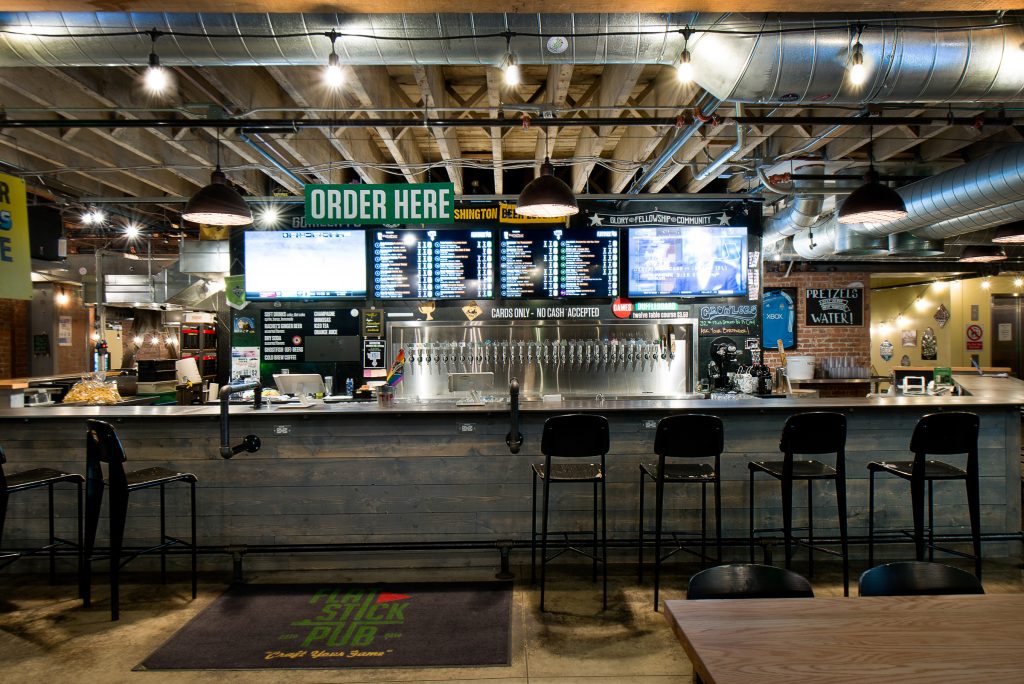 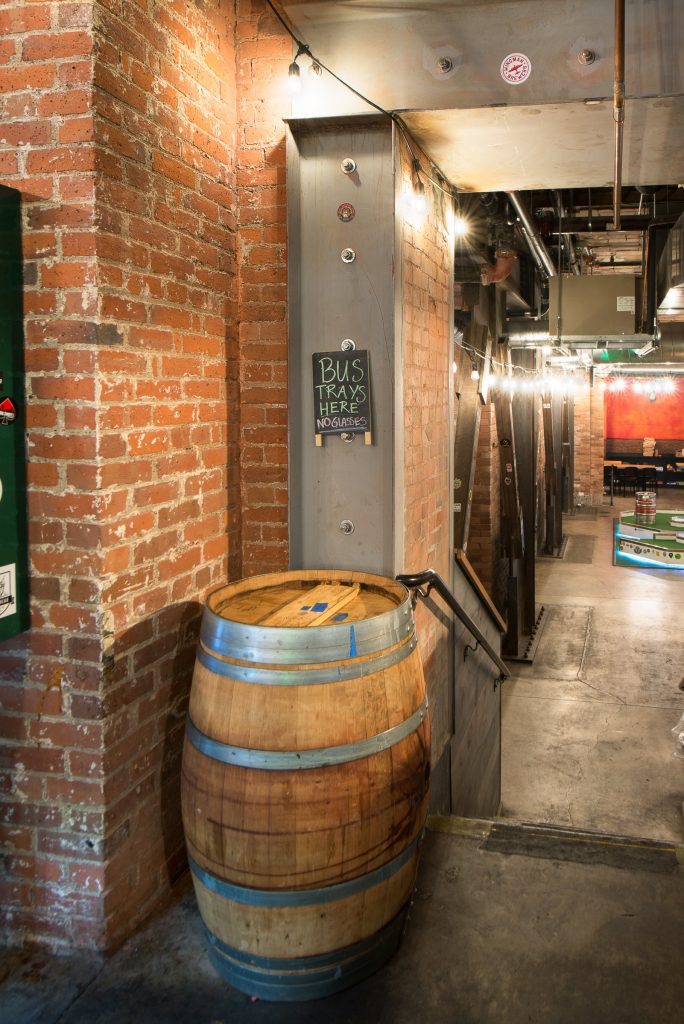 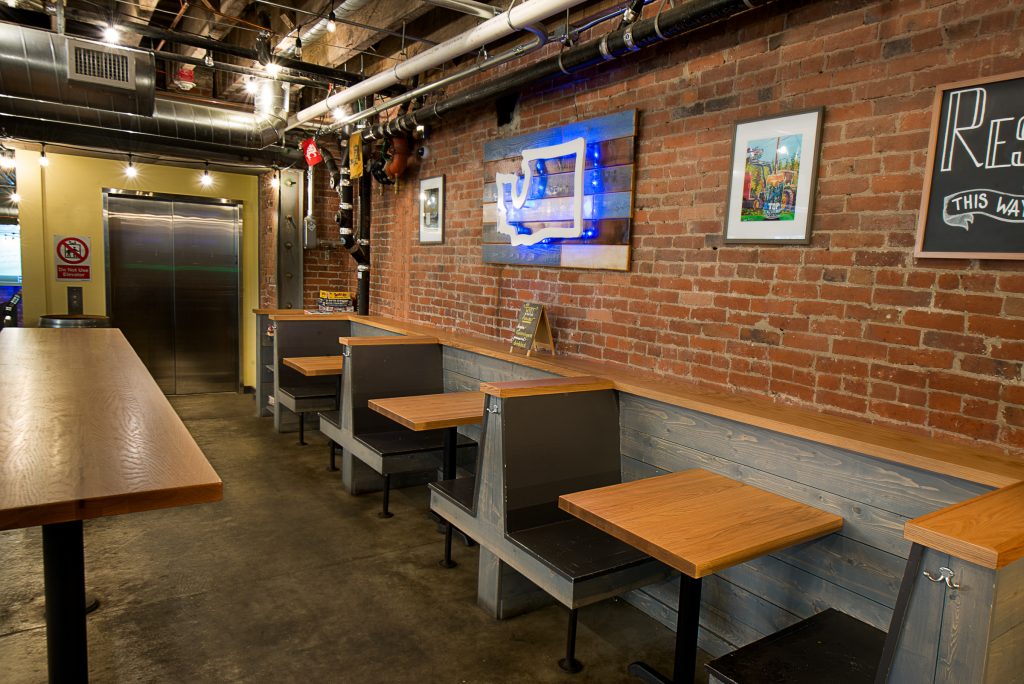 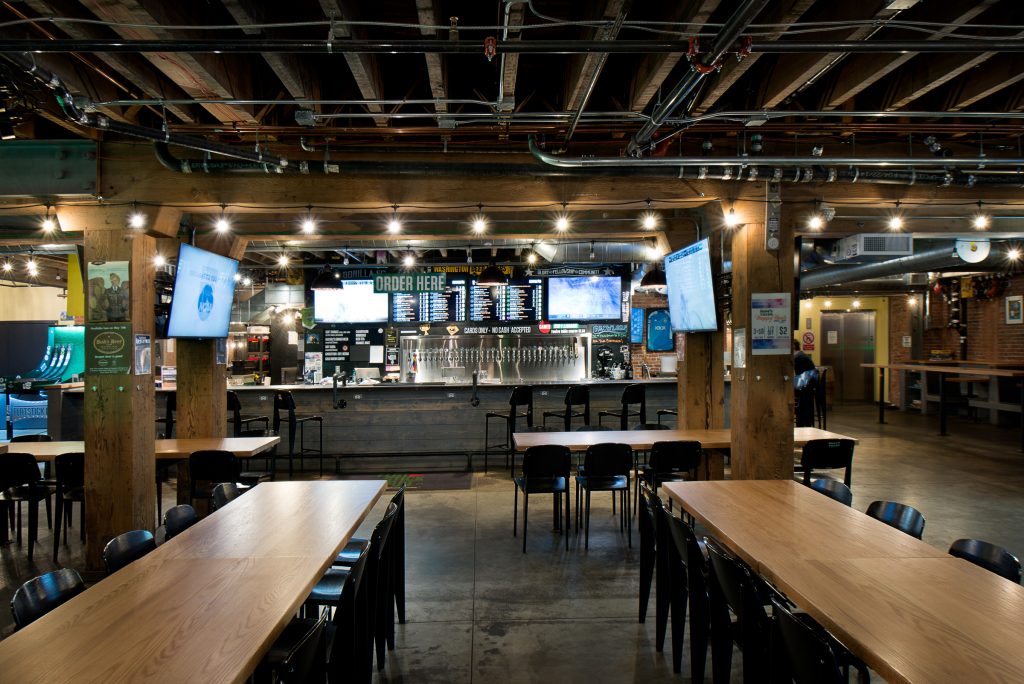 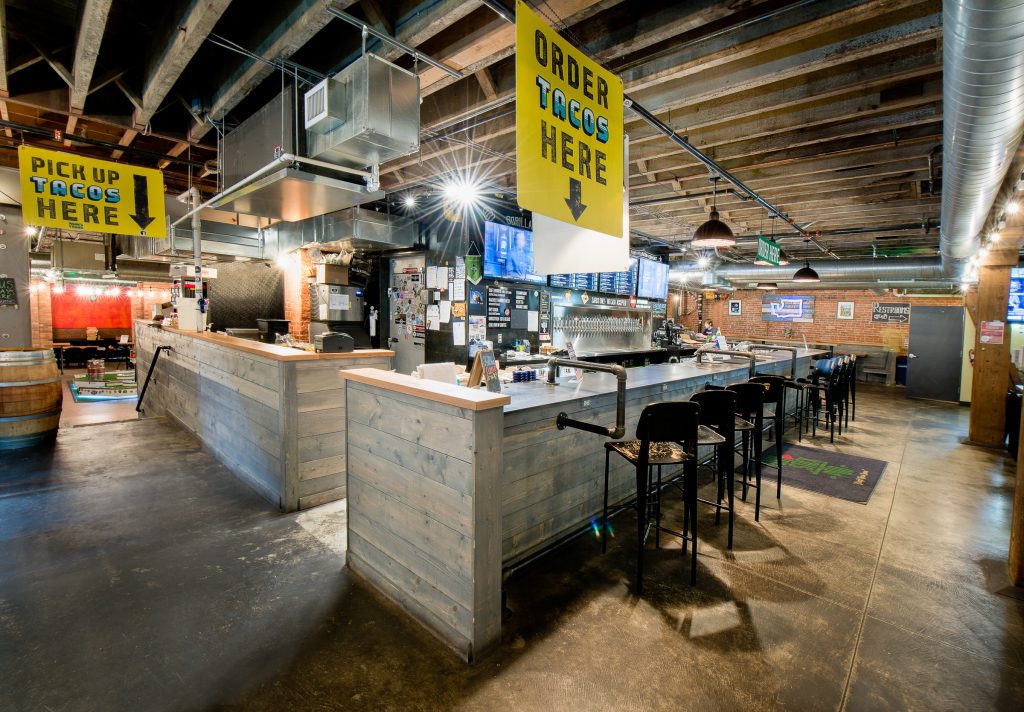 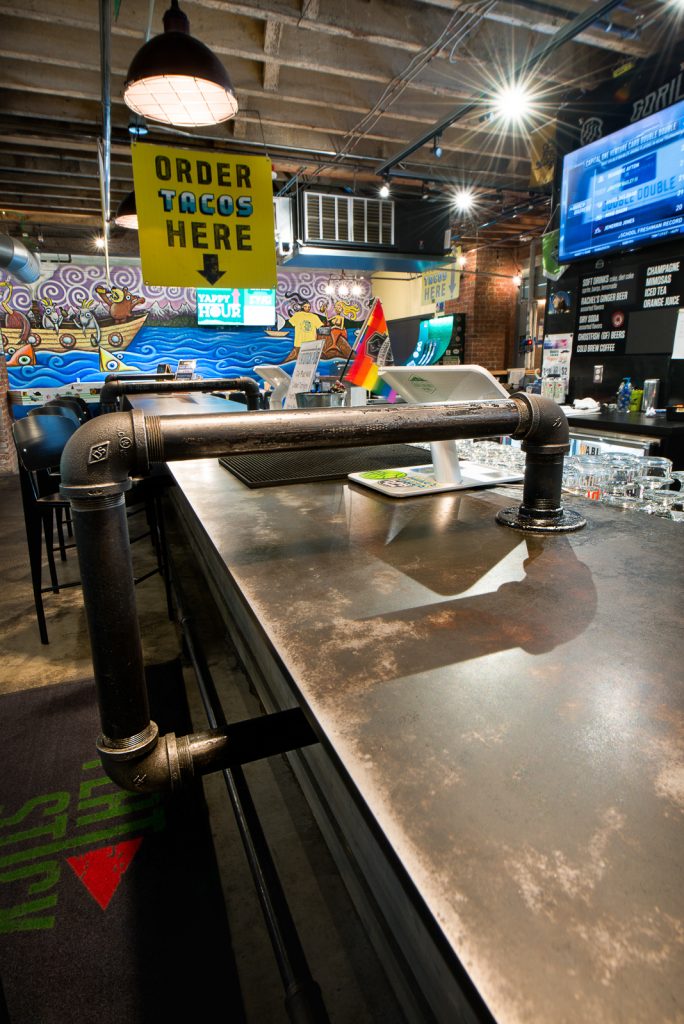 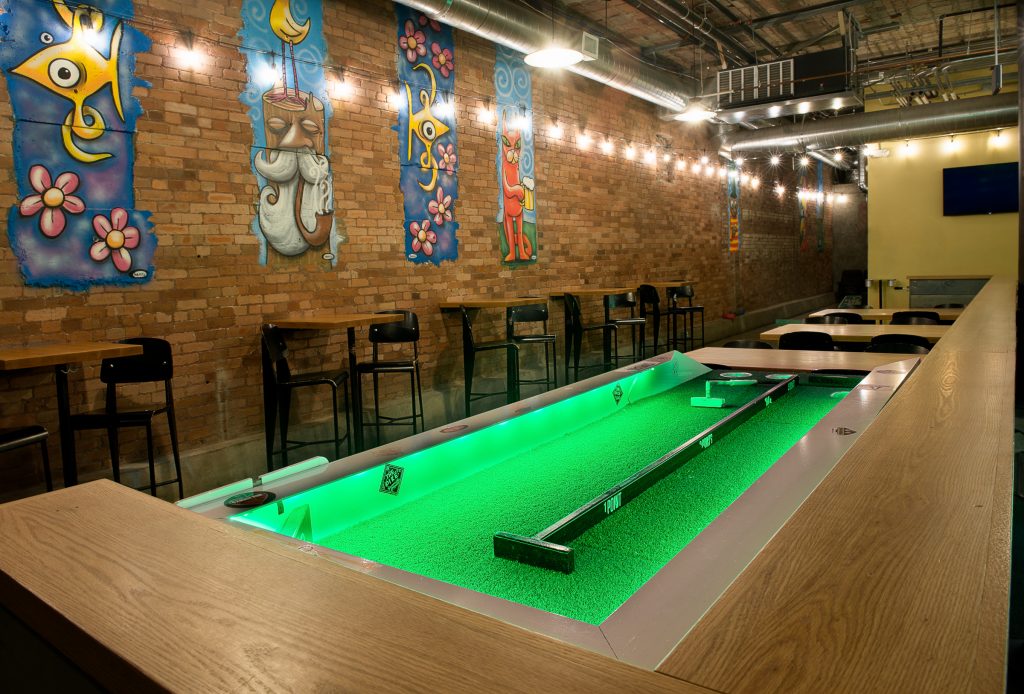 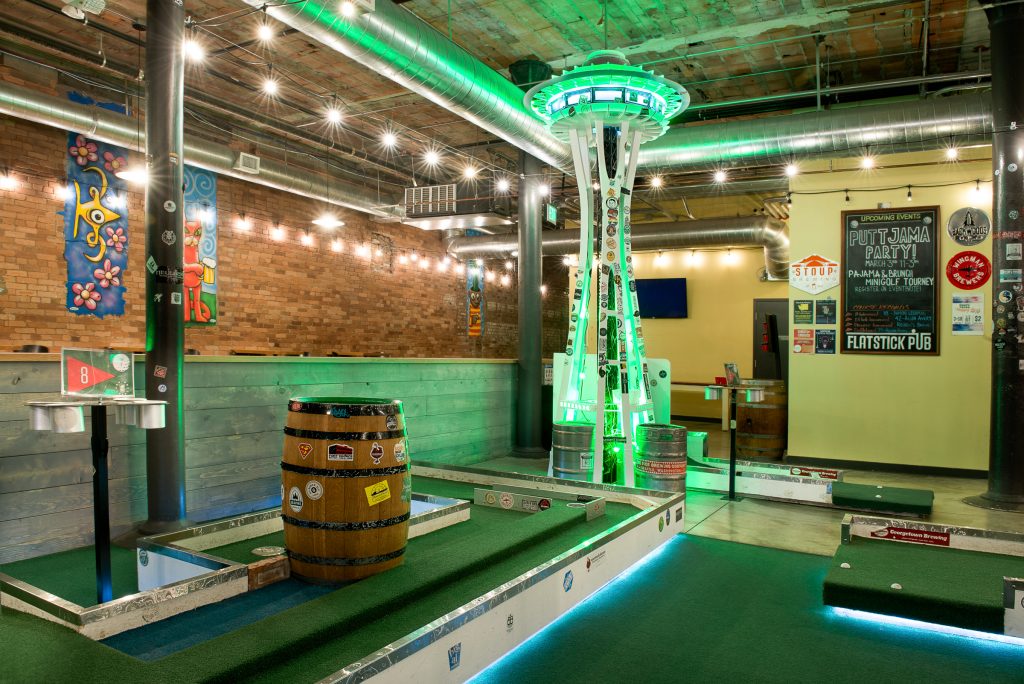 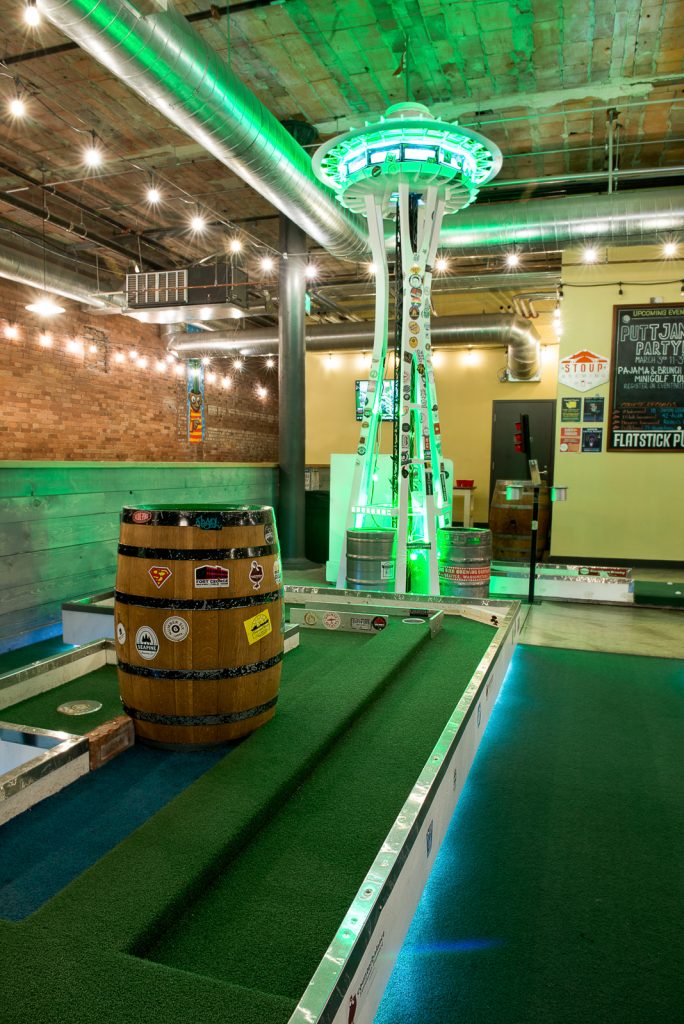 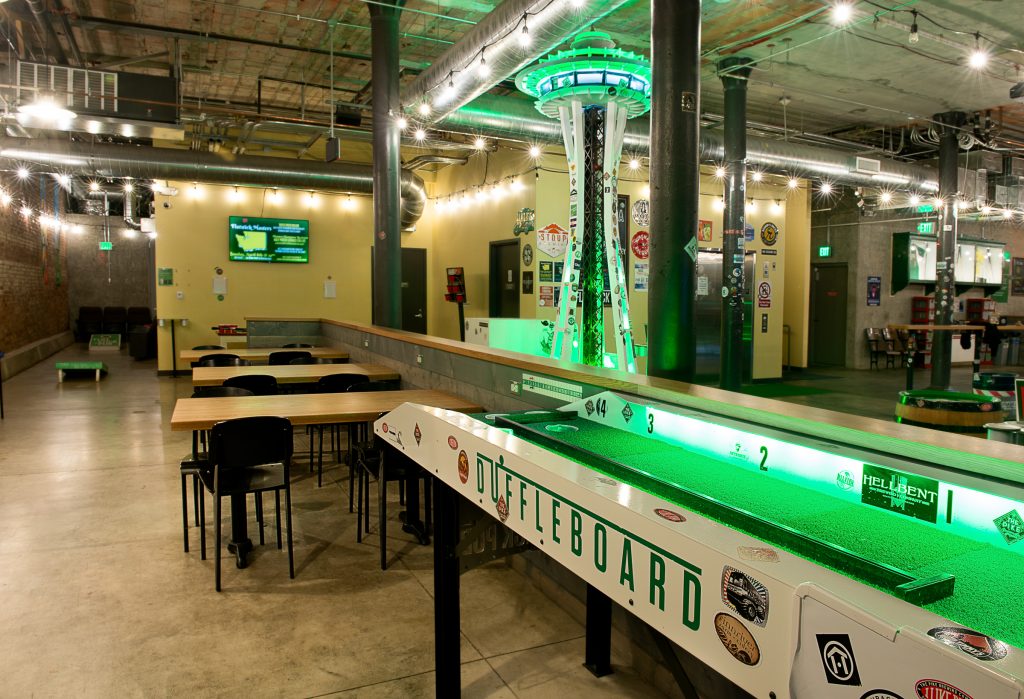 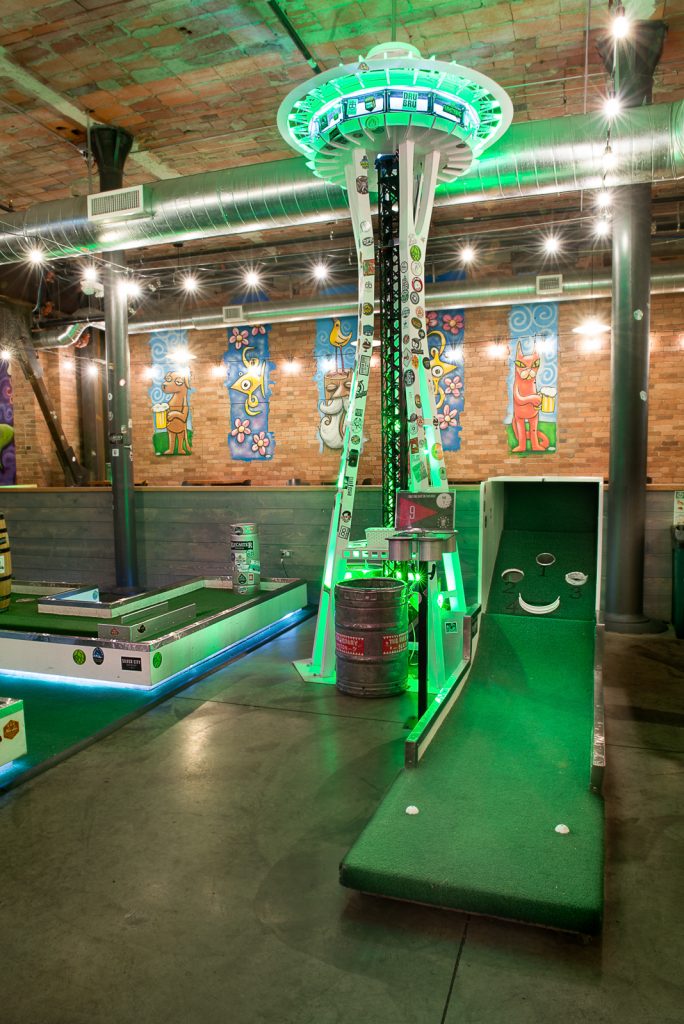 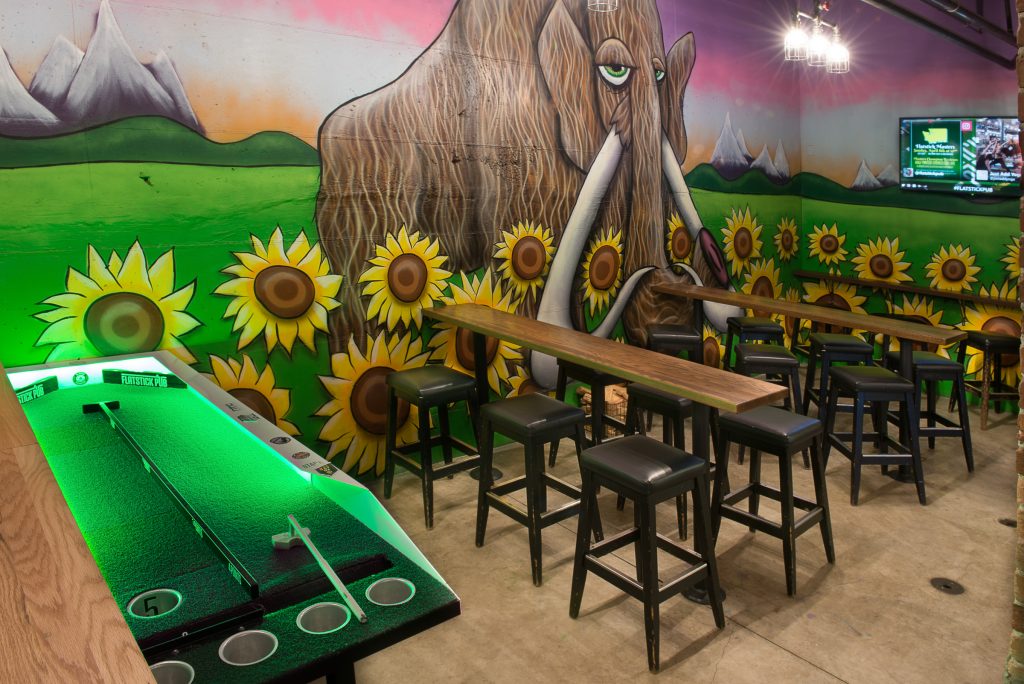 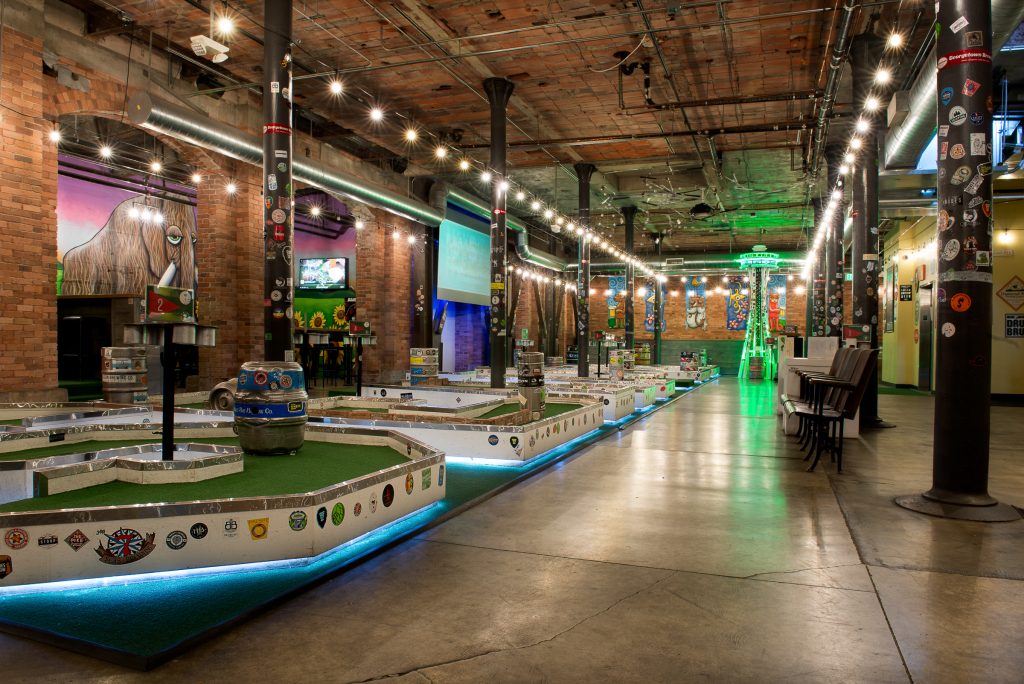 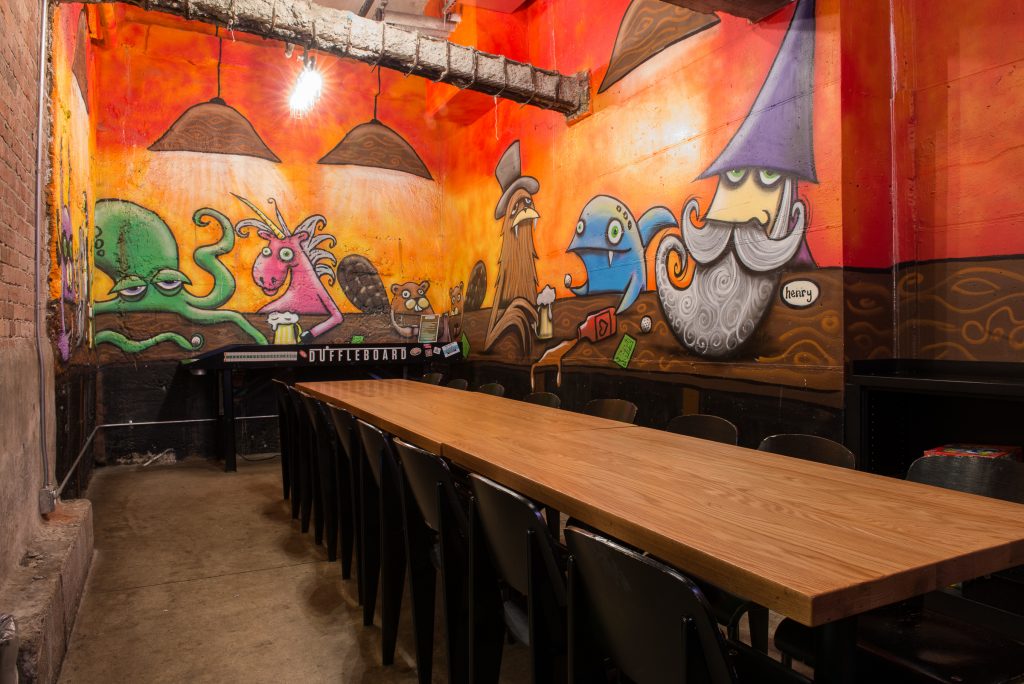 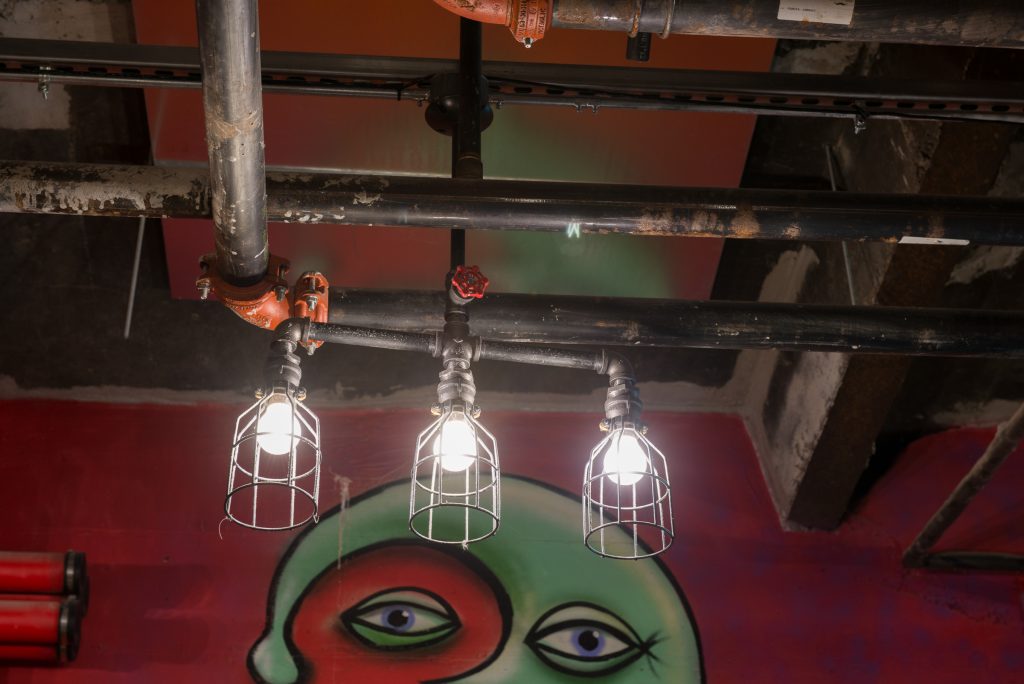 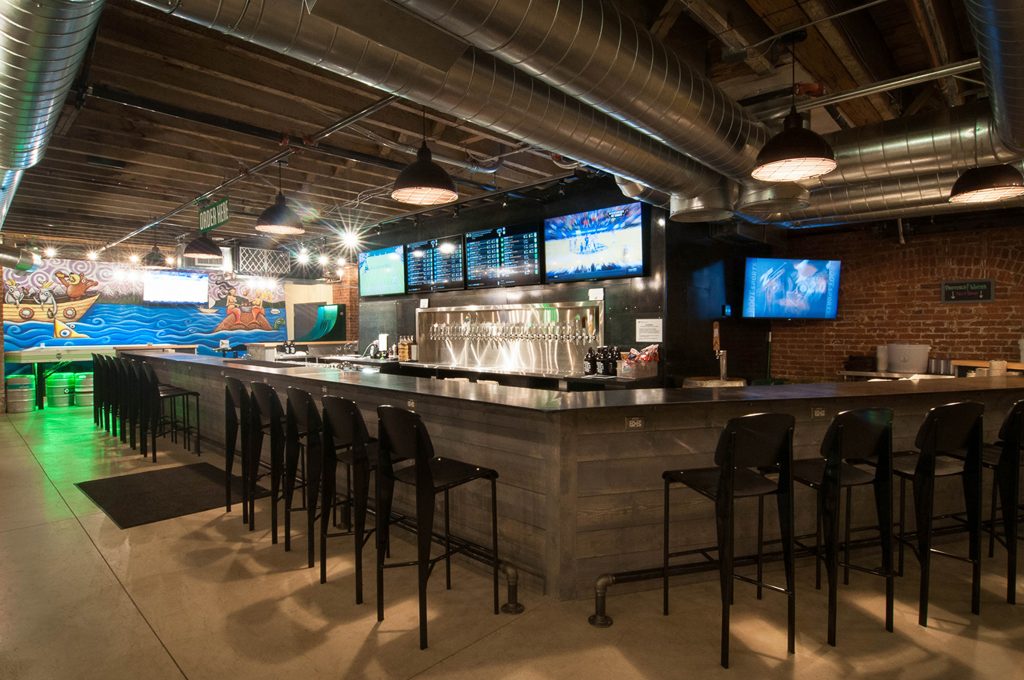 COPYRIGHT © 2023 ATELIER DROME LLP. ALL RIGHTS RESERVED.
Back to Top